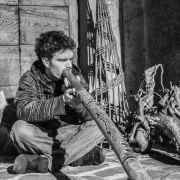 Oblium is a stage name for electronic musician Giorgio Ortelli,

a Sound Artist and Photographer from Switzerland.

Giorgio started studying drums as a kid and very soon, the fascinating world of audio recording and music production, became his every-day’s passion.

After many years of musical experimentation and journeys into various genres and adventures, Oblium project was created in January 2007.

The love for animals and nature itself, is an inspiration for his music and other artistic abilities.

Oblium’s music is organic and dynamic while being fast and raw in its defining sound;
is the result of a meticulous reflection on the sounds,
images and sensations of the night’s lunar world.

In 2009 funded his own record label: “Labyrinthine Crew”.

With a lifetime passion for music production and 2 decades of experience in the audio industry, Giorgio provides audio production service such as sound design, post-production, mixing and mastering. (Optinervear Studio, Switzerland)